Buy Direct. Save Money. Read On Any Device.

View cart “The Complete Harvesters Series” has been added to your cart.

My name is Haldin Raish. Legionnaire.

And the High General just murdered my parents.

My dad was well respected in the Legion. Always had a reputation for doing the right thing, no matter the cost. He was a good man. And whatever he stumbled onto got them both killed. Messily.

Now, that red-eyed thing is coming for me. It walks like the High General. Talks like him, too. But it’s not. Human beings don’t shirk off gunfire and smack grown men across the room like that. Not even High Generals. And he’s not the only one.

The only reason I’m alive is Carlisle. I still don’t understand how he found me that night, or how he does the things he does. Telekinesis. Inhuman speed. He tells me I can do these things too. I’m pretty sure he’s insane. Or one of them. But if the crazy bastard can help me get another shot at the thing that murdered my parents, well then… sign me up.

These things picked the wrong planet to mess with…

Long story short, you’ll always get the best deals on my books by buying them directly on this site.

The WHY pretty much boils down to the fact that, by going “direct” with the sale, we get to cut out the middle man, which in turn means I get to charge you less money while actually making a tad more on my end. That’s a win-win in my eyes.

(There are also a ton of other little considerations, like how selling this way also allows me to access the proceeds to reinvest in my business now, rather than having to wait months for royalty payments, but that’s all a little in the weeds for this discussion.)

Suffice it to say, in a publishing industry increasingly flooded by rapid release traffic and obscene advertising budgets, selling direct is becoming an important cornerstone in allowing me to take some control back from the major retailers while also making a living telling stories.

Better yet, if you DO decide to buy directly from me, you’re not pigeonholed into only having the book in one place. Once you click the “Add to Cart” button above, it‘s a simple and secure checkout via WooCommerce, and then you get to grab the book files directly and/or use Book Funnel to seamlessly read them on as many phone apps, PCs, or eReaders as you prefer. (Including Kindle, Kobo eReaders, and everything else.)

That said… you can ALSO find the Enochian War books on Amazon, Kobo, Apple, Google, and many other stores by clicking right here!

(That’s a universal link that will let you pick which store you’d like to be directed to.)

Whichever way you go, I sure hope you enjoy your adventure.

let me tell you a story, no middle man required

direct sales mean YOU PAY LESS and I MAKE MORE

via paypal and stripe 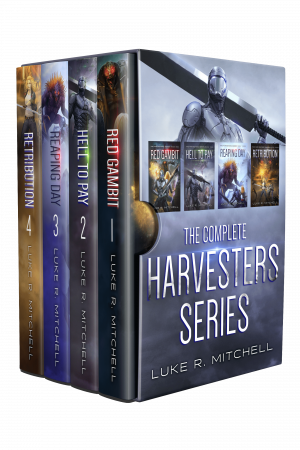